How to Get an International Driving Permit in Brazil?

The IDP in Brazil is issued under international road traffic regulations established by the 1968 Convention on Road Traffic.

IDPs in Brazil (Permissão Internacional para Dirigir or PID) are issued by the Traffic Departments (Departamento Estadual de Trânsito or DETRAN) of each Brazilian state as well as Automóvel Clube Brasileiro (ACBr). This document, which is valid for up to three years or until the expiry date of the national driving license, known as CNH (whichever comes first), is proof that you hold a valid national driving licence in your home country, and it is a legal requirement in order to drive or rent a vehicle in some countries.

Additional information about ACBr can be found in our website: https://www.automovelclubebrasileiro.com.br/sobre.php

Each DETRAN office has different IDP application procedures and fees. Please see the following links for information on how to apply for an IDP from your closest DETRAN office.

Brazil is the fifth largest country in the world.  It has a long coastline on the Atlantic Ocean, to the east of the country. Two-thirds of the population live near the coast.

The country may be divided into four main zones: the Guiana Highlands, the Amazon Basin, the Brazilian Plateau and the River Plate estuary. The terrain is relatively flat with the highlands not exceeding a maximum height of 3000 m.

Brazil has ratified the 1968 Convention on Road Traffic, as well as the 1943 Convention on the Regulation of Inter-American Automotive Traffic.

It is strongly recommended to carry either an official translation of the driving licence into Portuguese or an IDP that includes the pictogram page in Portuguese. Even if this is no longer a requirement according to Brazilian law, some drivers have reported problems with the police due to this. Certain car hire agencies may also require visitors to show an IDP if they want to hire a vehicle.

Brazilian vehicles drive on the right-hand side of the road, and have the steering wheel on the left-hand side.

Speed limits for cars are usually 30-40 km/h in built-up areas and 60-110 km/h in other roads, unless otherwise signposted. Most roads are unpaved, and some of them, particularly in the Amazon forest area, are impassable for the best part of the year due to heavy rains.

The emergency numbers all across the country are the following: 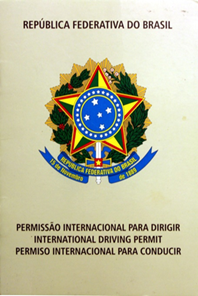